Who can help me to understand how Revenue data generated from VTEX AB Test works?

From the image below: 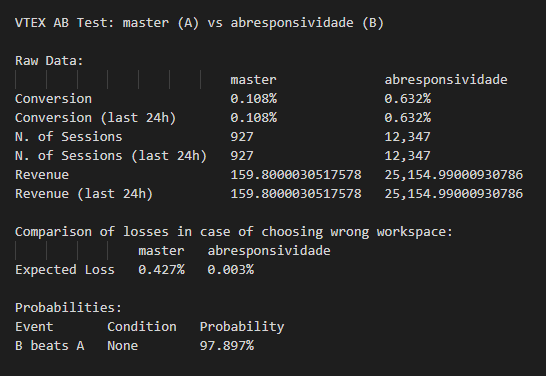 I found something saying that this data is generated from Bayes’ Theorem but I didn’t understand what these values represent and how to analyze this information.

From what I saw in the vtex.ab-tester code, in the case of revenue it enters a loop and starts fetching order revenue data from the start of the test until now, in groups of five minutes.

The actual revenue value reported for each workspace can be interpreted as the total value of orders placed by users navigating in the version of your store associated to that workspace. If your store is configured to report revenue in dollars, the numbers you see are the dollar amount, with . as the decimal separator.

However, it’s important to note that A/B testing can auto-adjust the traffic in tested workspaces. This is important for two reasons:

You can read more about this in the Running A/B tests guide in our Developer Portal.

Some mathematical concepts from our internal docs

Here are some important mathematical concepts used in the A/B test.

First, we will take the simplifying hypothesis of regarding only the conversion rate or revenue as the metric to be optimized. Now we should understand where it appears. We model our optimization problem in the following way:

Then we must understand some functions calculated to evaluate the performance of each workspace. These are the Expected Loss and B beats A values.

Think about a game where you play against a bank roll a fair dice and look the top face of it. The value that appears is the number of dollars the bank will give you.

Now we’ll change the game a bit. Suppose that when the number in the top face is an odd number you receive nothing and when is even you receive that amount of dollars.

The expected value in this game is very similar to the one we calculate in Expected Loss.

As the name suggests, we’re calculating the expected value of loss choosing a variant. Well, when this variant is better than the other we don’t have any loss, so it’s 0. Otherwise there is some loss and we will associate to it its probability of happening.

This topic was automatically closed 24 hours after the last reply. New replies are no longer allowed.